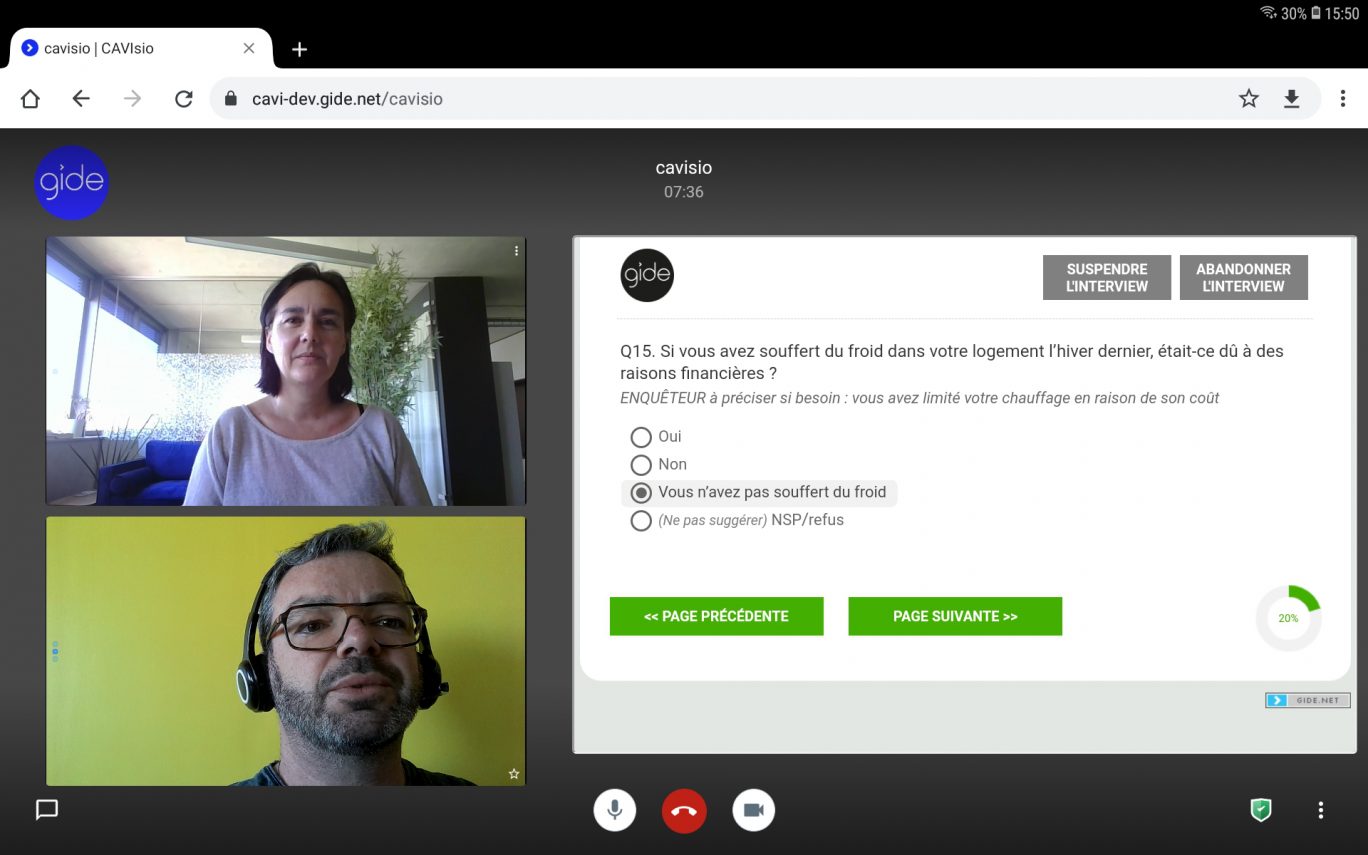 The Covid-19 pandemic and the imposition of social distancing has made it almost impossible to carry out face-to-face interviews, in particular at the respondent’s home or in specific locations (health establishments, public institutions etc.).

Read also : Covid-19: How can the market research industry bounce back?

Meanwhile, the same circumstances have provided the impetus for the mass adoption of video calling (e.g. WhatsApp, Facetime) and video conferencing (e.g. Zoom, Teams, Slack) as the media of choice for both personal and professional purposes, sidelining the telephone in the process.

This mainstream assimilation of video conferencing is particularly important within companies and certain professional sectors: recent studies show that nearly 2/3 of French General Practitioners have used video calling for their consultations, compared with around 5% before spring 2020.

Based on this observation, we had the idea of developing and making available to the market and opinion research industry a CAVI (Computer-Assisted Video Interviewing) solution combining CAWI and videoconferencing: CAVIsio. 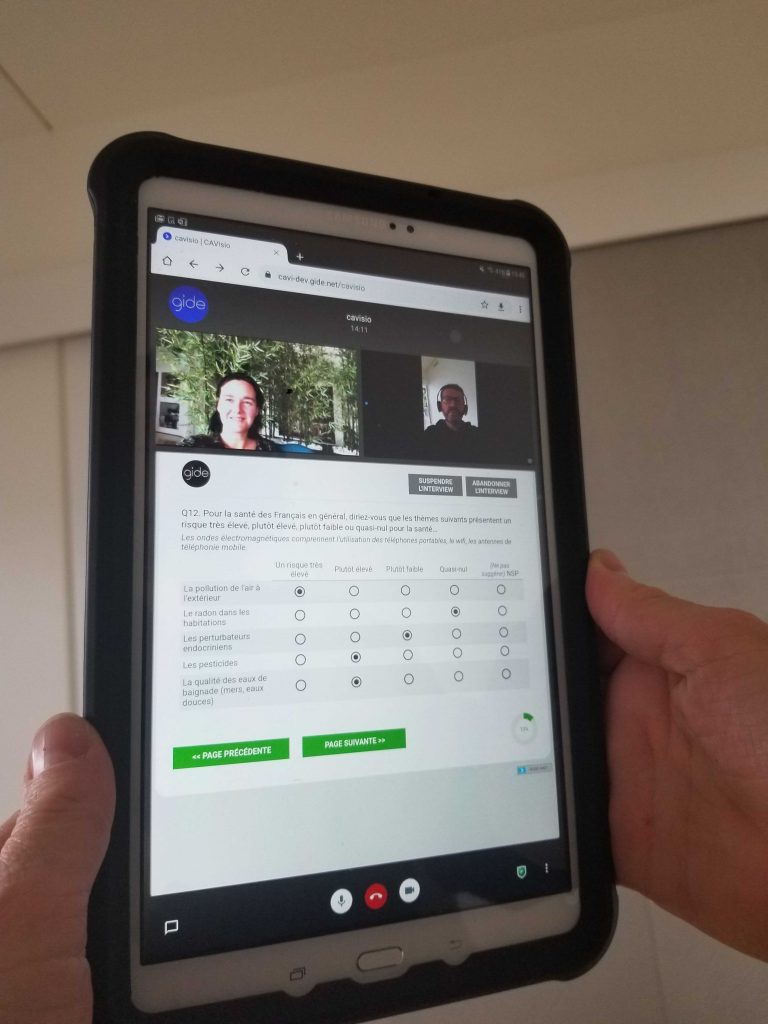 CAVI: the ‘sweet spot’ between CATI and CAPI

When “face-to-face” is difficult or impossible, the traditional alternative has usually been the telephone interview. Fine.

Except that, in most cases, a typical CATI investigator cannot replace a face-to-face investigator who has been specifically trained and who uses particular methods.
And studies show that, as soon as the interview time exceeds 40 ~ 45 minutes, or the subject of the study is too “sensitive”, it becomes difficult to maintain the respondent’s commitment over the phone: visual contact between interviewer and respondent is therefore important to guarantee their attention and ongoing involvement.
Furthermore, for longitudinal studies, it is often necessary for the same investigator to carry out all the interviews with the same respondent throughout the study.
In all cases, the material inconvenience and the physical and visual distance imposed by a telephone interview do not encourage the same quality of response as a face-to-face interview.

During the lockdowns, face-to-face investigators therefore had to carry out their interviews using a telephone (usually their mobile), while expediting the CAPI questionnaire on their tablet or laptop PC, without the possibility of showing anything to – or otherwise connecting with – the respondent.

As a consequence, the research institutes began to experiment with a range of video conferencing solutions in an attempt to replace simple telephone contact and, while the results are encouraging, the technical solution frequently proves to be a brake on the process.

To be fully usable, it often requires the installation of software / a native application on the respondent’s computer:

Even though audio-visual communication is made possible between the 2 actors, the course of the interview remains complicated because the interviewer has to juggle between the devices or windows which, on the one hand, carry the video and, on the other, unroll the questionnaire.
Finally, the routes taken by the video streams are uncertain: the fact that the video can pass through foreign countries, sometimes without encryption, poses a real problem of confidentiality for the interviews and the study.

A secure CAVI solution integrating video and questionnaire should make it possible to circumvent these difficulties.

We further believe that this new method of collection will last beyond the pandemic, given, among other things, the simplicity of its deployment and the savings that it can achieve compared to a classical face-to-face situation.

CAVIsio is a 100% Web-based solution that can be used through a simple Internet browser and therefore does not require any particular installation, least of all for the respondent. 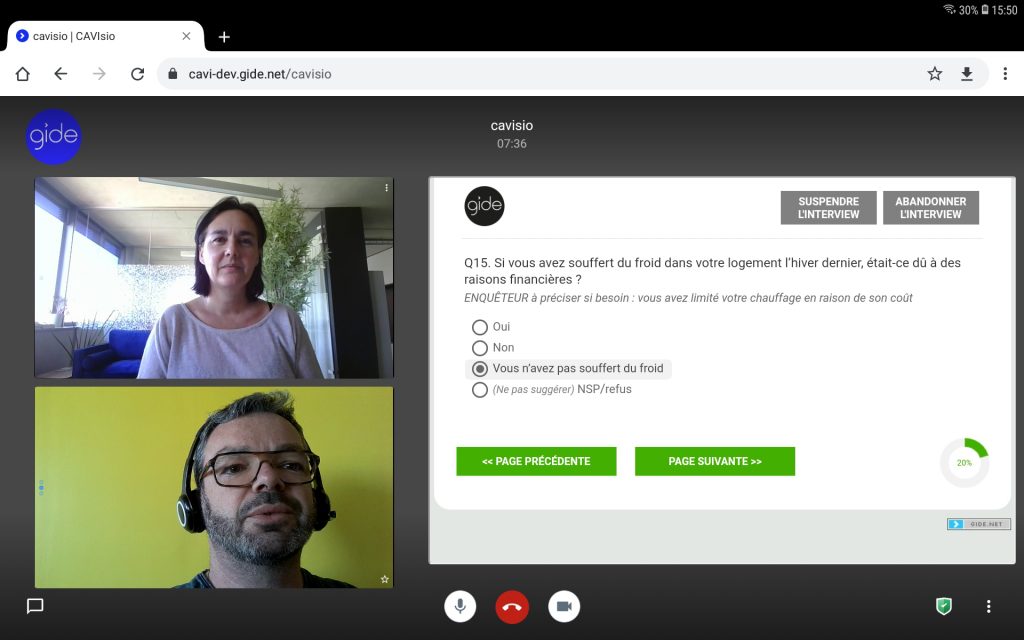 The solution is designed to work on a computer, tablet or smartphone. The only requirements are that the investigator’s workstation and the respondent’s device must be equipped with a webcam.

CAVIsio brings together – in a single browser window – the video streams of the interviewer, the respondent and the questionnaire.

Note that, while the CAVIsio platform is optmised for video, video is not compulsory: for example, if circumstances dictate, the interviewer can decide to use only audio to carry out a CATI-style interview during which they can share the questionnaire with the respondent.)

A “chat” zone can also be activated in the same interface to allow the interviewer and the respondent to converse in text form: practical, for example, if the respondent encounters technical difficulties with his webcam or to communicate information such as email address, web link, etc

For a better integration, the questionnaire is programmed by GIDE via SCROLL, our platform for programming and deploying CAWI / (web) CATI / CAPI questionnaires.

The layout of CAVIsio can be customised to convey the brand of the institute or the end customer.

CAVIsio is based on 2 distinct graphical interfaces:

Last but not least, regarding the security and confidentiality of communications, the data collected and the audio/video streams are hosted on GIDE’s servers in France.
In addition, all audio/video traffic is encrypted from end to end.

CAVIsio: how does it work?

First, the interviewer connects to a URL link pointing to GIDE’s secure servers, using their username and password.

The interviewer can also trigger the respondent side display of the list of choices only, of single or multiple visuals (in a particular or random order, as he would with face-to-face cards), videos, etc.
It is also possible to let the respondent answer some or all of the questions in the questionnaire in autonomy (self-administered mode).

Insofar as CAVIsio is based on GIDE development, we have total control over the product, which allows us to develop it by including new functionalities or by adapting it to the specific requirements of a client or a device.

We can already consider the following options:

COVID-19: the GIDE team remains available at your side

A Chance for Change: Gide gets involved against gender discrimination