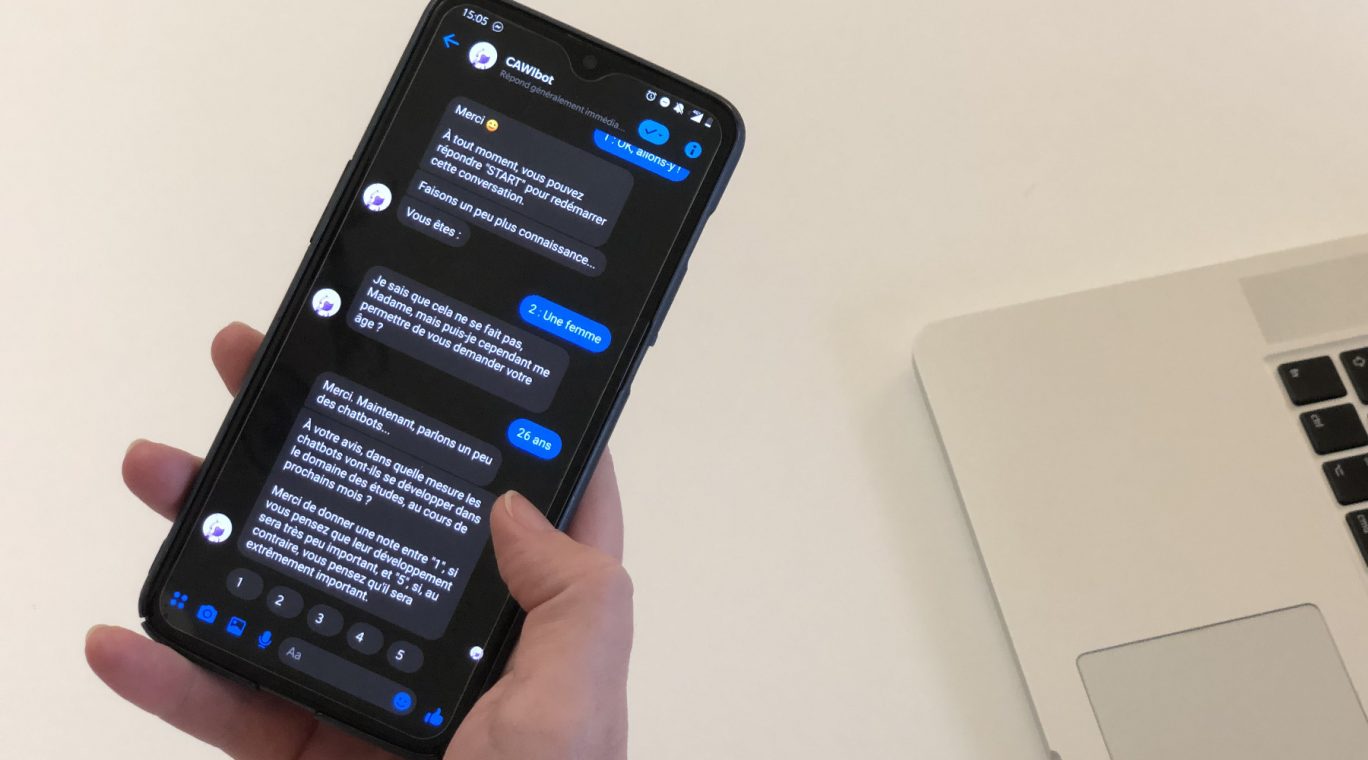 How chatbots can make your surveys conversational

Chatbots – or conversational agents – are have been a big buzzword these years. What are chatbot surveys? How and why can chatbots enhance user and market research?

Do you want to test our survey bot ?

I want to test CAWIbot

Chatbots: how do they work?

Chatbots, or conversational agents, are not a recent phenomenon. Did you know that the first chatbot was called Eliza and that it was created back in 1966? But in recent years, the implementation of chatbots has become more common, thanks to the success of instant messaging applications such as WhatsApp or Messenger.

Today, you can use a chatbot for just about anything: knowing the weather, booking an opera ticket, making a complaint about a train delay, or finding a recipe.

Many companies offer to create a chatbot in a few clicks, as if it were within everyone’s reach. The relevance of chatbots is often questioned, and one may wonder if their use really responds to a need, or just to a fashion phenomenon.

In fact, it all depends on the objective pursued, and the technology used. Indeed, there are several types of chatbots:

Chatbots often replace a simple search engine. I ask a question (example: “I’m looking for a Chinese restaurant open in Bristol tonight”), and the chatbot sends me a list of results. Nothing revolutionary about that: the chatbot is just a new kind of interface for data query, no more, no less.

In other cases, the chatbot will use your answers in order to solve problem, or make a proposal, following a predefined scenario.

These chatbots work a bit like the famous Akinator, released in 2007, which promised to read your mind, based on a database of possible questions and answers. The conversation with these chatbots is strongly guided, and sometimes you will have almost no text to enter: you will just click on the proposals made by the agent. Here again, the chatbot just offers a new interface to do something relatively simple!

Very quickly, these chatbots will be blocked because they don’t really understand human language. They use natural language processing technologies that allow them to extract important information from your sentences and compare them to their database. But as soon as you go off the beaten track… It’s over for them.

For instance, the french SNCF chatbot understand the query “Book a ticket”, but not “Book a train”!

But if you need to collect data in the case of a survey, this kind of bot will prove to be very effective, because their tree structure allows you to frame the data collection according to your goals, and to adapt the questions to the context, while benefiting of a “conversational” interface.

The most advanced chatbots incorporate an important layer of natural language processing: this technology makes it possible to transform written language into structured and interpretable data. But we can only rarely speak of artificial intelligence as such, because these bots are not “self-learning”: they only operate with rules that have been given to them, and the majority base their behaviour on a decision tree.

Integrating advanced natural language processing technologies into a chatbot project can however be interesting.

Indeed, it improves the user experience and response rate. Since the chatbot simulates a conversation, the user will be tempted to talk to him as he would to a human. If the chatbot does not understand, the user will quickly be disappointed and give up along the way. Thus, a chatbot who will be able to process responses in free text will collect much richer insights than a chatbot who will only offer multiple choices.

However, it should be noted that the cost of a chatbot integrating a natural language understanding is much higher than that of a more traditional chatbot, because there is important work to be done on integrating the vocabulary specific to your brand, your products and your business.

In the field of social and market research, chatbots were quickly identified as an interesting tool for gathering data.

A chatbot can replace a traditional form very well when you want to conduct an online survey. It will be able to ask a series of questions, propose possible answers, take into account previous answers: in short, that’s the job a traditional online questionnaire (CAWI).

But with some significant advantages:

How to reach your targets with a chatbot survey?

Conversational surveys can take many forms:

The oldest channel for conversational surveys is SMS: to reach your target by SMS, you just need to know their mobile phone number. But the experience is much less seamless than on instant messaging platforms. The SMS survey will therefore be limited to very short questionnaires.

Recently, a new protocol called RCS, a form of “enriched” SMS, has been attracting a lot of attention. The aim of this protocol: to propose a standard format that offers SMS the same features as instant messaging (group chat, video calling, audio messaging…) Mainly driven by Google today, this technology, if it develops, should further improve the user experience of this channel.

The most famous channel is Messenger.

Since Facebook opened Messenger applications on Messenger in 2016, hundreds of thousands of chatbots have been deployed. The system is robust and very feature-rich. But problem is that you can’t send a “push” message to your targets by Messenger, unless they have contacted your brand on their own. Impossible to use for a specific target.

On the other hand, the Messenger chatbot is a very good way to deploy a survey on your website or mobile application. The advantage is that it is possible to set up rules for triggering the survey according to the context: after an order, after a certain time spent on the site, from certain pages… The chatbot can also take over from an advisor after an interaction with your customer service on Messenger, in order to conduct a satisfaction survey or NPS.

In 2018, WhatsApp opened its platform to companies, allowing them to use its API to create bots and chat with their customers. It is now possible to create bots for WhatsApp, this encrypted messaging system with 1.5 billion users in 180 countries. As soon as you know your target’s mobile phone number, it is normally possible to send him a push message via WhatsApp. Considering the huge opening rates on this platform, the opportunities are enormous!

However, some of the tools WhatsApp offers to companies are still in beta version. There is a great deal of uncertainty about the possibilities of direct communication via WhatsApp for companies, not to mention the risks inherent in the GDPR.

There are dozens of instant messaging applications, but if we focus on the most used internationally, we have to mention WeChat, the Chinese messaging application with over a billion users. If you want to reach an Asian audience, in the field of luxury and beauty, for example, it may be very interesting to look at the possibility of using WeChat to distribute your survey.

Chatbot surveys: for whom?

Chatbots or conversational agents are therefore an interesting new tool to play with for you research projects.

At Gide, we were pioneers in the field when we launched our SMS questionnaire tool (Short Message interviewing System or SMiS), and especially when we launched CAWIbot, our chatbot survey tool.

Thus, we were able to test the limits of this survey bots.

For all these reasons, we recommend using this channel in addition to more traditional channels. When we set up CAWIbot, the data collected is centralized within our SCROLL platform, just like data collected by email or SMS. Thus, chatbot is only one of the options of your multi-channel survey strategy.

I want to test CAWIbot

Video surveys, a new tool for market and user research